All The Birds In The Sky is a book that defy’s all possible genres and does so quite successfully. It’s the story of a witch and a tech mogul and the world between them.

The novel opens with a young Patricia in a Doctor Dolittle-esque that consists of a wounded bird, a mean older sister, a cat and a wise old tree. The scene serves as an introductory to Patricia and her abilities as she begins to discover her own uniqueness. 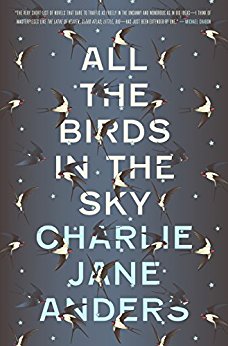 Following this initial glimpse into Patricias life, we are soon introduced to a young tech nerd named Laurence who is quite the savant when it comes to technology. Laurence finds himself  being a social outcast at his school, he spends his free time building devices that he finds instructions for on the internet. One of his projects is an Artificial Intelligence program that dwells in a computer in his bedroom.

Inevitably Patricia and Laurence meet and become friends as they go to the same school together. They begin to mature into their respective abilities. This gets the attention of a certain member of a Nameless Order that attempts to interfere with the ultimate destiny of these two. As the children grow, Patricia starts exhibiting the powers she possesses as a young witch while Laurence hones his technological abilities. They help each other get out of trouble when necessary. Interestingly, Patricia and Laurence begin to grow together and apart almost simultaneously as they each have to come to terms with each other.

This attraction and polarization of Patricia and Laurence is done quite well by Anders – it showcased that despite these twos sharp differences, there is something that transcends these that’ll bring them together. Although the book does focus on the relationship between Patricia and Laurence, it does so in a world that is on the verge of complete collapse. Hurricanes are wiping out large portions of the United States while other disasters arise that must be confronted. Can magic and technology come together to help solve these crises instead of warring against one another?

This is perhaps the strength of All The Birds In The Sky as it serves as an allegory for the world that we live. Anders does not make an assertion that one field of thought is better than another, that true strength comes with solidarity rather than war.